John Waller is a painter. A very good one. His compositions represent the next step in a pictorial tradition that underpins much of Australian art.

Waller practices a mode of landscape-based abstraction which was inaugurated by Paul Cézanne in the 1880s, and has dominated contemporary painting ever since. Its local adherents have included such figures as Margaret Preston, Russell Drysdale, Horace Trenerry, Lawrence Daws and Fred Williams: artists whose influence on Waller’s canvases is readily apparent at a glance. This artist has an in-depth knowledge of our own modern masters, and he will speak of their work with expert understanding. Waller’s pictures also testify to an international sensibility. His taut planar compositions exude values acquired through major overseas landscape-based painters of the 1960s onward, like the British artists Peter Lanyon and David Hockney, and, especially, the distinguished American abstractionist Richard Diebenkorn. This is why Waller’s canvases wear their cosmopolitan sophistication with such quiet facility. They readily hold their own against the best current international work in this landscape-oriented vein (as his recent New York sales demonstrate).

Waller’s paintings use an insistent compositional format derived from the planar landscapes he grew up and worked in, that he knew well, and he felt an emotional empathy with. This geometry comes from Mildura in North-Western Victoria, and also from Lajamanu and Mungaroopna in Central Australia: three landscapes that the artist visually stretches out and flattens into a sequence of irregular rectangles. If the configuration is distilled from an aerial viewpoint—from looking down at a pattern of tracks and paddocks—there is nonetheless a strong sense of verticality to his paintings. Each composition hangs from the residue of a horizon line which zips across the top (a legacy of Williams and Diebenkorn). And there is an optical push-pull at play in the way he uses zones of hot/advancing and cool/receding colour, qualities which lead the work to switch between flat-design and spatial-landscape as light varies. His paintings will distinctly change character in the morning, afternoon and night, bringing forth different resonances.

Design is important, but the success of a picture rests on execution; because paintwork is elemental. You can’t fake eloquence. And it is here that John Waller’s mastery shows. He handles his brushes the way a concert pianist handles a Steinway. He makes difficult, quite eloquent effects seem easy.

Paintings, like passages of music, are tricky things to discuss. You are searching for words to describe, the right words which link with your experience of this thing which is essentially wordless. Toughest of all is to explain the mood, because it will be conveyed by the finish, the use of colour, the brushwork, and those are slippery things to pin down with language. Should we say the paintwork is spicy, or mechanical? Adroit, or slapdash? Knowing something of art history can be little help, because much of it is a case of classroom arguments over blurry lecture slides or shiny book illustrations, never the real thing. Besides, academics fixate on the imagery and tell a little story of what is being depicted, not drawing our attention to those musical qualities of the painting, its execution. Its like hearing someone explain, say, a pop song, and only discussing the words, not anything of the melody, the instrumentation, the rhythm and beat, the mood. And musicality is everything! Likewise, with paintwork in art. How many talks have we heard on art history that said nothing of the art behind it all?

This is where Waller really stands apart. He paints with proficient ease. Nowhere in his latest canvases does the artist err into that turgid, thickly-layered and heavy paint of the unskilled. At a distance, the eye is stimulated by the razzle-dazzle of Waller’s vivid colours, their energised exuberance. Then you move in and see how the artist has employed thin glazes (a demanding technique used by Lloyd Rees and Sidney Nolan) which optically makes sections appear to glow from beneath. This is more than craftsmanship. It is authority. Seen up close, those paint surfaces are so light, crisp and tastily executed. Indeed, standing just arm’s length away, the sensitive viewer will delight in the individual painterly notes of tone, texture and colour. As one looks, John Waller’s paintings reveal themselves to be so intricately orchestrated.

John Waller’s paintings are derived from the landscape he has an emotional empathy with. Like most professional artists of his generation, Waller is visibly concerned with the craft of painting: the immediate quality we are aware of when viewing his works is the brushwork, his tasty handling of oil pigment, the way it has been trowelled and scraped and smeared into most evocative textures. Yet a landscape subject is always insistently there in his geometric forms, shapes which speak directly of the experience of rural Australia, the way that the land is cris-crossed by razor-straight roads and fences of immense length so that, from a raised viewpoint, it resembles an arrangement of huge irregular rectangles.

Indeed, thinking beyond the adroitly worked paint, we might start to perceive that some of Waller’s oblongs appear filled with dried grass, some with traces of struggling crops, some with the sun-pounded red earth. What we are looking upon is not any landscape; it repeatedly echoes the painter’s childhood home, that bleached expanse sitting between by the Murray River and the desert in south-western New South Wales.

The artist, who as a child discovered Aboriginal remains of great antiquity there, looks on this as the scene not just of his own youth. Framed by the bustling modern town of Mildura in the south, and the ancient archeological site of Lake Mungo to the north, this plain has witnessed the cycle of human toil for fifty thousand years. Hence, packed with emptiness, the wheat and ochre-coloured world of Waller’s painting often contains the blurry spectral form of passing humanity in mid-field. 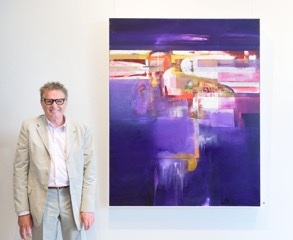